Science is used to study the world around us. For centuries, chemists have been studying all the states of matter and their properties. Today, we can use the results of these studies to answer several questions. Why do scuba divers get bends? How do syringes work? You can answer these questions by studying Boyle’s law.

Many scientists have attempted to summarise the behaviour of gases mathematically. As a result, we have now got 3 major Gas Laws, namely Boyle’s Law, Charle’s Law and also Gay-Lussac’s Law. A 4th law also called, Avogadro’s law, is arrived at by using all of the previously mentioned laws.

These laws apply to an ideal gas, which can be characterised as follows:

“the absolute pressure exerted by a given mass of an ideal gas is inversely proportional to the volume it occupies, if the temperature and amount of gas remain unchanged within a closed system”

This statement has several elements:

Keeping the above conditions in mind, let us take the pressures p1 and p2 of a gas at two different times t1 and t2, where the ideal gas correspondingly occupies volumes v1 and v2.

According to Boyle’s law,

Going forward from the kinetic theory of gases, we know that the molecules of an ideal gas are constantly colliding inelastic collisions. Just look at this picture of the same jar when the volume is changed by using a piston, assuming that no gas escapes and the temperature remains the same: 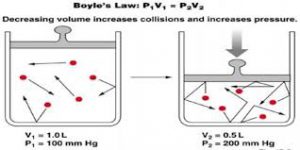 Notice that the pressure decreases as the volume increases.

Look at the same curve at different temperatures: 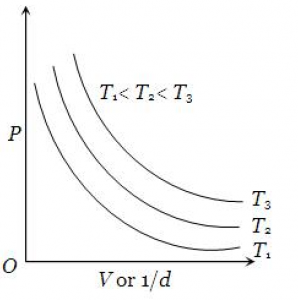 Boyle’s law is one of the most important laws in Physics and Chemistry. This appears in the Kinetic Theory of Gases chapter in physics and also in the Gaseous state chapter in chemistry. Boyle’s law is a part of many numericals in both board exams as well as entrances and other competitive science exams.

The Daily Current Affairs Of 30th-April-2022