The study of light encompasses many phenomena. Optics is a vast subject, and one of the most important concepts in optics is refraction. In order to understand refraction, we generally study prisms of different shapes and how light behaves with them. Read on to know more about rectangular prisms. (i.e glass slabs) and refraction.

Whenever you view an object through a glass prism of any shape, you always find it to be either displaced or distorted. This is due to certain rules followed by light in the way it propagates. To understand why this happens we must start with understanding the duality of light.

Physicists have long debated the nature of light. Light first considered to be particulate by Pierre Gassendi, and later by Isaac Newton. Both saw light as corpuscles that travelled in straight lines and were emitted in all directions. The photoelectric effect observed by Hertz and other scientists seemed to confirm this. However, there seemed to be a slight problem.

While the reflection of light can be explained by corpuscular theory, refraction could not. Light also experiences interference and diffraction, which are all wavelike characteristics. Huygens, Young, and Fresnel later came up with experiments that prove light to be wave-like. Although these experiments were logically convincing, phenomena like the photoelectric effect could not be ignored.

Hence, light was finally accepted to exist in a dual state as both particle AND wave. Understanding what prisms do to light involve studying light as a wave. The phenomenon in question is refraction.

When light passes from one medium to another, it actually changes direction instead of passing through straight. As a result, the image can either be shifted or distorted. For example, when you look at a pencil that is half-submerged in a glass of water, you notice it appears distorted.

Refraction occurs with every wave passing from one medium to another and follows certain laws without exceptions:

The incident ray, refracted ray, and the normal to the point of incidence all lie on the same plane.
Snell’s law (see below)

Note: To understand Snell’s law, we must have a little introduction on refractive indices.

According to the definition of refractive index, we get

Most physicists express laws in terms of mathematical equations. Snell’s law is no different. It describes how the angle of incidence and angle of refraction of a ray of light are related. 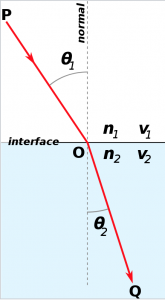 We see that the incident ray PO does not travel in a straight line, and refracts to form OQ.

The incident angle is θ1 and the refracted angle is θ2.

Thus, if n2>n1, the ray is shifted towards the normal, and vice versa.

Let us now consider the case of refraction through a glass slab. For simplicity’s sake, we will consider a glass slab in air. Air has a refractive index of 1. When a light ray passes through a rectangular slab, it is incident on two surfaces, namely the two surfaces that are in contact with air.  Let us understand this with the help of the given diagram: 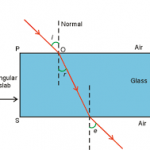 Here, we see that the ray is incident on surface P as well as S. As a result, two refractions occur.

Let us call the normals N1 and N2 from left to right respectively.

From Snell’s law, we know that

This means that the emergent ray is parallel to the incident ray.

Though the incident and emergent rays are parallel, they do not lie on the same line. This means that the emergent ray is laterally shifted by some amount from the incident ray. To find out more about this lateral displacement and how to calculate it, visit eduriefy.com today!