ReactJS is a declarative, efficient, and flexible JavaScript library for building reusable UI components. It is an open-source and component-based front-end library that is responsible only for the view layer of the application. It was initially developed and maintained by Facebook and later used in its products like WhatsApp & Instagram. To know more about React JS, visit the Edureify website.

Answer:- React is a declarative, efficient, flexible open-source front-end JavaScript library developed by Facebook in 2011. It follows the component-based approach for building reusable UI components, especially for single-page applications. It is used for developing interactive view layers of web and mobile apps. It was created by Jordan Walke, a software engineer at Facebook. It was initially deployed on Facebook’s News Feed section in 2011 and later used in its products like WhatsApp & Instagram.

(2) What are the features of React?

Answer:- React framework gaining quick popularity as the best framework among web developers. The main features of React are:

(4) Give me the two most significant drawbacks of React?

React requires the users to know the integration of the user interface into the MVC framework.

(5)What are React Fragments used for?

Answer:– React fragments are a special feature in React that let you write group children elements or components without creating an actual node in the DOM.The fragment syntax looks like an empty set of tags <></> or is tags labeled React. Fragment.In simpler terms, sometimes we need to put multiple React elements under a single parent, but we don’t want to use a generic HTML element like a div.

(6) What is Flux Concept In React?

Answer:- Facebook widely uses the flux architecture concept for developing client-side web applications. It is not a framework or a library. It is simply a new kind of architecture that complements React and the concept of Unidirectional Data Flow.

(7) Define the term Redux in React?

Answer:- Redux is a library used for front-end development. It is a state container for JavaScript applications that should be used for the application’s state management. You can test and run an application developed with Redux in different environments.

(8)What is the ‘Store’ feature in Redux?

Answer:- Redux has a feature called ‘Store’ which allows you to save the application’s entire State in one place. Therefore all its component States are stored in the Store so that you will get regular updates directly from the Store. The single state tree helps you to keep track of changes over time and debug or inspect the application.

Answer:- It is a function that returns an action object. The action type and the action data are always stored in the action object. Actions can send data between the Store and the software application. All information retrieved by the Store is produced by the actions. Visit the Edureify website to know more about redux along with reacting JS.

(10) Name the important features of React?

Answer:- Stateless components are pure functions that render DOM-based solely on the properties provided to them.

Answer:- React Router is a routing library that allows you to add new screen flows to your application, and it also keeps the URL in sync with what’s being shown on the page.

(13) What are the popular animation packages in the React ecosystem?

Answer:- Jest is a JavaScript unit testing framework created by Facebook based on Jasmine. It offers automated mock creation and a jsdom environment. It is also used as a testing component.

Answer:- A dispatcher is a central hub of the app where you will receive actions and broadcast payload to registered callbacks.

(16) What is meant by the callback function? What is its purpose?

Answer:- A higher-order component also shortly known as HOC is an advanced technique for reusing component logic. It is not a part of the React API, but they are a pattern that emerges from React’s compositional nature.

Answer:- The super keyword helps you to access and call functions on an object’s parent.

(21) Explain the yield catchphrase in JavaScript?

Answer:- Synthetic event is a kind of object which acts as a cross-browser wrapper around the browser’s native event. It also helps us to combine the behaviors of various browsers into signal  API.

Answer:- It is an object which decides how a specific component renders and how it behaves. The state stores the information which can be changed over the lifetime of a React component.

Answer:- A state can be updated on the component directly or indirectly.

(26) Explain the use of the arrow function in React?

Answer:- The arrow function helps you to predict the behavior of bugs when passed as a callback. Therefore, it prevents bugs caused by this all together.

(27) What are the lifecycle steps of React?

(28) State the main difference between Pros and State?

Answer:- The main difference between the two is that the State is mutable and the re immutable.

(29) Explain pure components in React is?

Answer:- Pure components are the fastest ccommonattttnnn thatcan replace any component with only a render(). It helps you to enhance the simplicity of the coding application.

(30) What kind of information controls a segment in React?

Answer:- There are mainly two sorts of information that control a segment: State and Props.

Answer:- ‘create-react-app’ is a command-line tool that allows you to create one basic react application.

Answer:- Keys allow you to provide each list element with a stable identity. The keys should be unique.

Answer:- Children’s props are used to pass components to other components as properties. You can access it by using{props. children}

Answer:- Error boundaries help you to catch Javascript errors anywhere in the child components. They are most used to log the error and show a fallback UI.

Answer:- Empty tags are used in React for declaring fragments.

Answer:- Strict Mode allows you to run checks and warnings for react components. It runs only on development builds. It helps you to highlight the issues without rendering any visible UI.

Answer:- Portal allows you to render children into a DOM node.  CreatePortalmethod is used for it.

Answer:- Webpack is a module builder. It mainly runs during the development process.

Answer:- Babel, is a JavaScript compiler that converts the latest JavaScript like ES6, and ES7 into plain old ES5 JavaScript that most browsers understand.

Answer:- If you want the browser to read JSX, then that JSX file should be replaced using a JSX transformer like Babel and then sent back to the browser.

(42) What are the major issues of using MVC architecture in React?

Answer:- Here are the major challenges you will face while handling MVC architecture:

(43) What can be done when there is more than one line of expression?

Answer:- At that time a multi-line JSX expression is the only option left for you.

Answer:- The reduction is an application method of handling State.

Answer:- It is a cross-browser wrapper around the browser’s native event. These events have interface stopPropagation() and preventDefault(). Visit the Eduriefy website for more information on any topic related to coding.

(46) When should you use the top-class elements for the function element?

Answer:- If your element does a stage or lifetime cycle, we should use top-class elements.

(47) How can you share an element in the parsing?

Answer:- Using the State, we can share the data.

Answer:- When a component’s state or props change then the rest will compare the rendered element with the previously rendered DOM and will update the actual DOM if it is needed. This process is known as reconciliation.

(49) How can you re-render a component without using the setState() function?

Answer:- You can use the forceUpdate() function for re-rendering any component.

Answer:- You can’t update props in react js because props are read-only. Moreover, you can not modify props received from parent to child.

Answer:- Restructuring is the extractprocessssan an of an array of objects. Once the process is completed, you can separate each object into a separate variable.

(52) Can you update the values of props?

Answer:- It is not possible to update the value of props as it is immutable.

(53) Explain the meaning of Mounting and Demounting?

Answer:- ‘Prop-types’ library allows you to perform runtime type checking for props and similar objects in a recent application. Download the Edureify app now to have some of the best courses on your to-do list.

Answer:- React hooks allow you to use State, and other React features without writing a class.

Question:- What is ReactJs used for?

Question:- Is React hard to learn?

Answer:- Both HTML and CSS are integral to any web development project. If you have these skills already, then learning React should be a relatively straightforward process. It has its own unique set of challenges, but it is an excellent tool to have in order to start or further your career as a web developer.

Question:- Are ReactJs and JavaScript the same?

Answer:- React is just JavaScript, there is a very small API to learn, just a few functions and how to use them. After that, your JavaScript skills are what make you a better React developer. There are no barriers to entry. A JavaScript developer can become a productive React developer in a few hours.

Question:- Does React use CSS?

Answer:- In React, each React component gets its own CSS file, which is scoped to that file and component. For a React component that you’d like to style, simply create a CSS file that’ll contain the styles for that component. 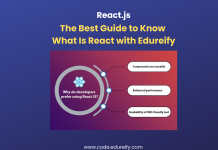