What is Selenium Python?

Selenium is an effective technology for automating browsers and controlling web browsers through software. It is functional across all major browsers and operating systems, and its scripts can be written in a number of languages, including Python, Java, C#, and others. For our purposes, Python will be used. WebDriver, WebElement, and unit testing with selenium are just a few of the topics covered in the Selenium tutorial. This Python Selenium Tutorial covers Selenium’s fundamentals as well as more complex and useful applications.

Why study Python for Selenium?

How to Add Selenium to Python

An element can be a tag, property, or anything, it is an instance of class selenium.  After you find an element on the screen using selenium, you might want to click it or find sub-elements, etc. Selenium provides methods around this WebElement of Selenium. To check out how to use element objects in selenium, visit – WebElement in Selenium Python. Various methods one can use with an element in Selenium Python are discussed below.

Why do we use Selenium for automation testing?

Following are some aspects that, why we prefer Selenium for automation testing:

Along with the selenium python and the online coding courses tutorial, you need to see some other concepts which are beneficial:-

Ans:- With the ease of code, Selenium with Python is easy to read. Besides, it is dynamically typed. Abundant programmers are well-versed in Python as a language. Connecting a browser through Selenium is easy because of the utilization of Python’s API.

Q:- Is Selenium better than Java or Python?

Ans:- Most software testing companies prefer to use selenium web drivers with Java for testing web applications. However, using python instead of Java offers ease of writing scripts. This often brings testers to the question that which combination is better for selenium test automation.

Q:- How do I add Selenium to Python?

Q:- Which language is popular for Selenium?

Ans:- Though Selenium comes with a test domain-specific language (Selenese), other programming languages (Java, C#, Ruby, Python) can be used to script tests as well. Tests made in other languages communicate with Selenium via calling methods in the Selenium Client API. Selenium is therefore neutral to the client’s language. 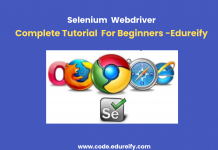 Selenium Web Driver: The Most Important Feature of the Selenium Tool’s Suite