For all the government exam aspirants, Edureify brings to you the daily current affairs for your better preparation. Government exams like SSC, Railways, WBCS, and more require its candidates to be well aware of the latest news.

Well, Edureify is here for your help. We have curated today’s current affairs for you to not go look anywhere else in order to stay updated with the news.

1. DRDO Successfully Flight Tested SFDR Booster at ITR off the coast of Odisha-

Here was the daily current affairs of 9th April 2022. 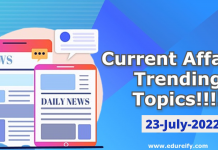